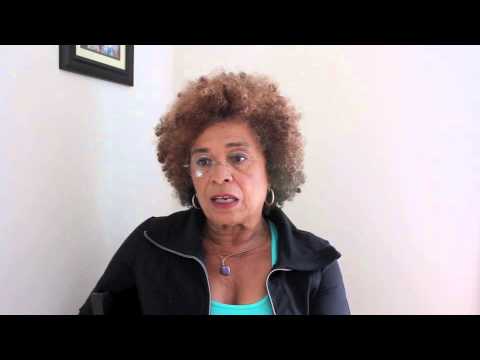 Angela Davis calls for a mass march on Chicago City Hall on Wednesday, August 28, 2013 for “Peace with Justice.”  “Fifty years after the historic March on Washington for Jobs and Freedom led by Dr. Martin Luther King, Jr. on this date we are still not free.   We are confronted by a new Jim Crow, that is, the mass incarceration of African Americans, Latinos and other people of color.”

Angela Davis was a founding member and Co-Chairperson of the National Alliance Against Racist and Political Repression, the parent organization of the Chicago Alliance Against Racist and Political Repression.  She is a widely respected author and activist in the struggle for freedom and justice for all people, especially people of color.  She issued the following statement this week.

I would like to add my name to the call by the Chicago Alliance for a mass march on the Chicago City Hall on Wednesday, August 28, 2013 for “Peace with Justice.”  Fifty years after the historic March on Washington for Jobs and Freedom led by Dr. Martin Luther King, Jr. on this date we are still not free.  We are confronted by a new Jim Crow, that is, the mass incarceration of African Americans, Latinos and other people of color.

The acquittal of George Zimmerman for the murder of Trayvon Martin, coming only weeks after the Supreme Court gutted the Voting Rights Act, adds new urgency to this march.

The police are the cutting edge of the prison-industrial complex.  The mass incarceration of Black and Latino men and women – millions of them – starts with being arrested.  Furthermore, the police are supposed to be the first responders, protecting the people from violent and other forms of crime.  It’s time that the City Council and the Mayor enact and empower an elected Civilian Police Accountability Council [i].  That’s what the march on City Hall is for.

Officials report that Chicago police killed 63 people and shot another 153 between 2009 and 2012.  This violence was perpetrated against 172 African Americans and 27 Latinos [ii].  In these same four years 1,846 people were murdered in Chicagoiii.   The overwhelming majority were African Americans and Latinos.  The police and the State’s Attorney seem powerless to do anything about this.  They have solved very few of these crimes and they often get the wrong person.  Chicago is the wrongful conviction capital of the United States.  Hundreds of Black and Latino men and women have been tortured until they confessed to crimes they did not commit.  Many were sentenced to death (Illinois abolished the death penalty in 2012).  Others have been sentenced to prison, many for their Natural Lives.

Documented instances of police involvement in murder, drug trafficking, gang involvement, and other crimes are plentifuliv.   The city admits that Rekia Boyd, a 22 year old African American woman, and Flint Farmer, a 29 year old Black man, were murdered by the Police.  They admit that many police torture victims have wrongfully spent decades in prison.  They have paid out hundreds of millions in settlements and attorneys fees on these cases, but not a single CPD officer has ever been charged with any of these crimes.  Most are still on the force, or are retired and collecting their pensions.

This is why I want to add my voice to all those of the CAARPR Organizing Committee to Stop Police Crimes in urging everyone within sound of my voice to come to the Federal Plaza at 11:00 am on Wednesday, August 28, and march to City Hall demanding that the police be held accountable for their failures and their crimes.