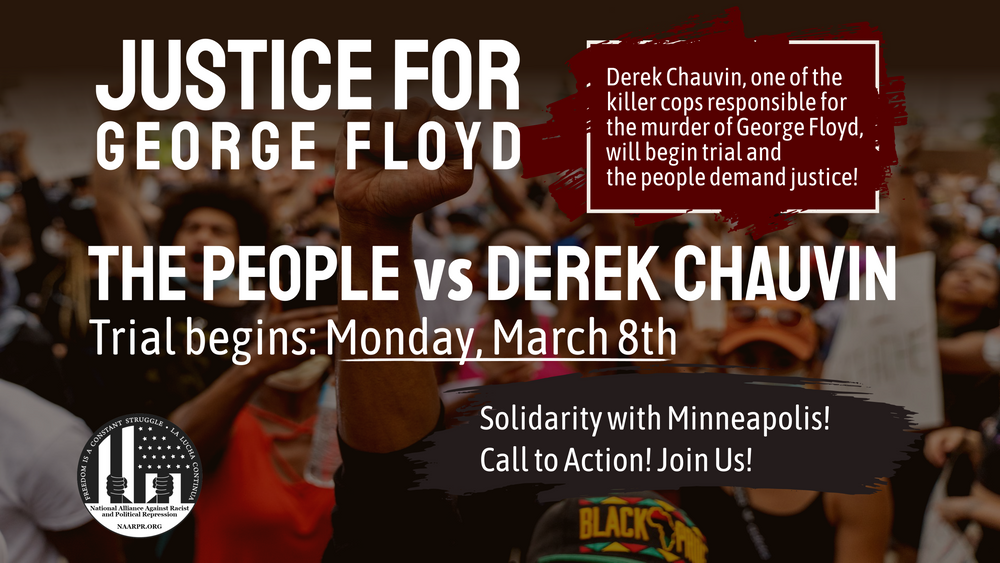 Find an action near you: https://fb.me/e/3NJn8PrVy

Derek Chauvin is the first of the four killer cops to stand trial for the murder of George Floyd. The trial is set to begin Monday, March 8 (with jury selection). The whole world witnessed the brutality that stole George Floyd’s life. People took to the streets in cities and towns in every state in this country to demand justice for him and for all those murdered by police.

On the first day of the trial, Minnesota organizers will hold a mass protest outside the Hennepin County Government Center (300 6 th St S, Minneapolis). We urge all organizations that want justice for George Floyd to endorse this call.

We ask our supporters nationally to hold solidarity rallies in their cities. People in Midwest cities are welcome to travel to Minneapolis for the first day of the trial. After March 8, we also ask for continued solidarity from our allies throughout the trial.

This trial is not only important for Minnesota, which has never seen a white police officer prosecuted for murdering a Black person. It is important for the entire country, which was set aflame in rebellion after Floyd’s murder. We will not rest until we see all four of George Floyd’s killers taken off the streets, and our communities have the power to decide who polices our communities and how our communities are policed. Stand with us.

Justice for George! All power to the people!

If your organization wishes to be listed as an endorser or if you will be holding a solidarity action in your city on March 8, contact NAARPR at +1 (312) 939-2750 or [email protected]

RSVP to an action near you: https://fb.me/e/3NJn8PrVy