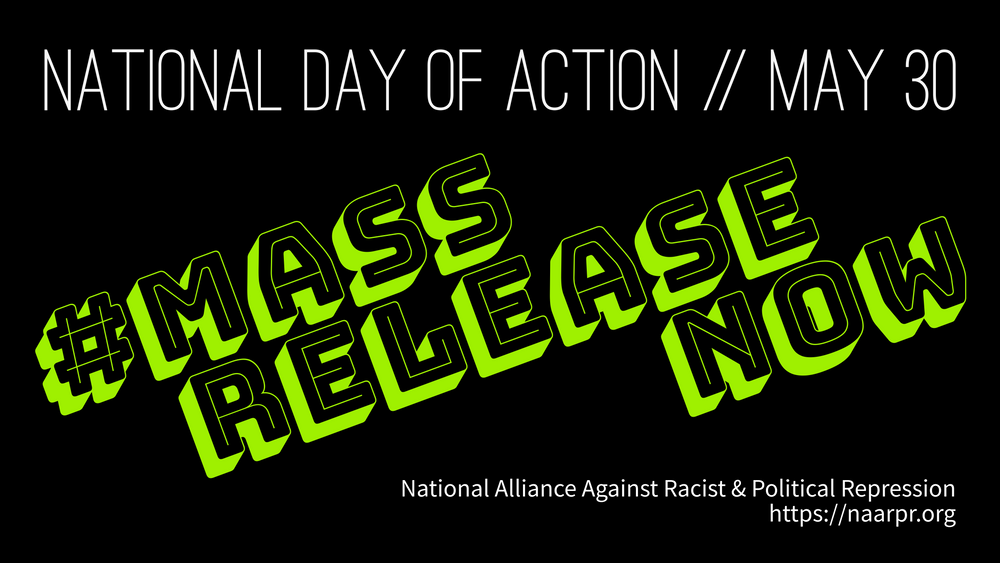 The recently refounded National Alliance Against Racist and Political Repression calls upon all its members, comrades, friends and allies to join in a national day of protest on May 30ᵗʰ, 2020 at 3:00 PM EST.

We as a movement have been agitated into taking mass, united action not by the pandemic alone but even more significantly by the Federal Government and the financial lords and barons of Wall Street who, driven by their own greed and lust for political power, are willing to sacrifice the lives, health, safety and wellbeing of the people; who deem their profits and their continuing plunder of the national treasury of our nation more important than the lives of the people.

We will be protesting to stop the racist murder and violence that this administration has willfully unleashed. Not only is the government standing by as COVID-19 ravages African American, Latinx and Indigenous communities—inciting mass Black death with their calls to reopen the economy, but the police and racist vigilantes continue to brazenly hunt and kill Black folks while they sleep in their beds and on open roads in broad daylight. We are protesting the murders of Ahmaud Arbery in Georgia and Breonna Taylor in Louisville because they are outrages that demand justice. This lynch style, racist terrorism must stop, and perpetrators must be punished.

We are calling for this united action to protest genocidal policies of government that have allowed city and county jails, federal and state prisons, juvenile detention jails, and Immigrant detention centers to become hot beds for COVID-19 infections and death camps for millions. Who are the human beings incarcerated in these so-called correctional facilities?

They are overwhelmingly oppressed Black and Brown people, LGBTQ and Trans people and poor white, working class people. They come to jails and prisons in large part from the 140 million poor people living in America. They cannot voluntarily social distance themselves. Their confinement prevents them from taking action to protect themselves from death-causing infections. Their continued imprisonment under these circumstances is an act of genocide.

We must help them. The prisoners of Cook County jail in Chicago managed to write on one of the windows of the jail: HELP WE MATTER 2.

We are calling this united action to help protect all prisoners from COVID infections and death by demanding that all prisoners be liberated from the death camps that U.S. prisons have become. We demand that the President, Governors and Mayors, Prosecutors and Judges take immediate steps to depopulate jails, prisons and Immigrant detention centers and juvenile facilities.

We are calling this united action to demand the immediate release of all political prisoners and the wrongfully convicted survivors of torture immediately. These prisoners can be released by pardons, commutation of sentences, paroles, furloughs, signature bonds and prosecutors dropping charges and judges granting probations. The federal and state governments have plenty of means for meeting our demands and no reason to deny them other than greed and profiteering off of private prisons and prison labor, the still legal form of slavery under the 13ᵗʰ Amendment.

We will mobilize for car caravan protests and social distancing protests throughout the country. In united action we will standup, fightback and resist to exist. We will not now or ever stand in silence in the face of the crimes of government perpetrated against oppressed peoples and the working class. We must make certain that there is resistance throughout the land in order to have a new and better world after we overcome this pandemic.